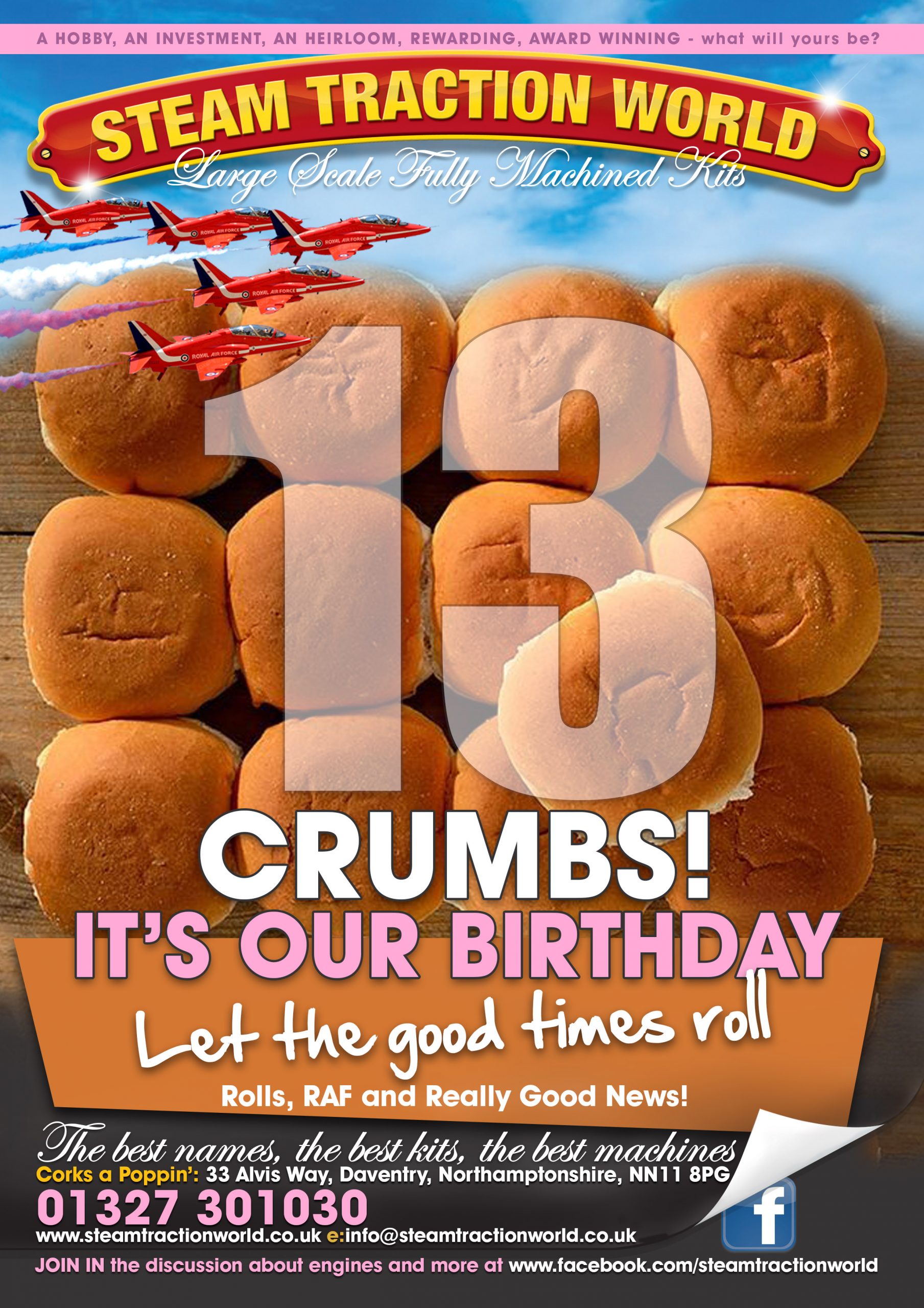 Something to celebrate Steam Traction World’s thirteenth birthday. We are proud to say we have been part of this journey from the very beginning.

We are thirteen today. Thirteen. But no terrible teenager just terrific news.
13 – a bakers dozen. Let the good times roll!

It has been a roll-ercoaster of a ride, but what a ride. We have enjoyed (almost) every minute.
Incredible engines and incredible builds sent all around the world with hundreds of enthusiasts “living the steam.”
We have achieved so much over the years and, only recently, our fourth new CNC machine has been installed enabling a quicker turnaround of parts. There has been investment in staff, marketing and processes to ensure we are the best thing since sliced bread. We think you’ll appreciate the improvements.

There’s more news too…
Last Friday, we said Goodbye but a huge thank you.
Whilst Steve IS still very much part of the past thirteen years, his legacy has now been fulfilled with his family benefitting from not only the purchase of his share of the factory but also the purchase of his shares in the company that both he and Dean nurtured and developed to where it is today.
Despite losing his battle against Prostate Cancer over 2½ years ago now, Steve will always be a big part of Steam Traction World and every engine that leaves our factory will go on to steam in his honour.
…and Hello!

Around 8 years ago, Steam Traction World sought investment. Investment to grow and enable us to build stock to the level it is today (£½ million pounds in spares alone). Despite the company being in good shape, the banks at that time would not entertain a loan just to put parts on the shelf in the hope orders would come in. After a chance conversation with one of our customers Ian Griffin came up with a proposal, after a couple of meetings a deal was done.

Ian is a huge steam enthusiast, building and owning several STW engines he is also the Managing Director of a successful lift engineering company Griffin Elevators Limited putting up the dough to enable us to invest in machinery, stock and give us a firm platform to progress. This has enabled us to grow from a £400k company in 2012 to hitting £1 million last year for the first time.

With our 13th Birthday, we are pleased to announce Ian has agreed to join STW as a director as well as a shareholder.

Today, Steam Traction World is very much more independent, secure, focused and looking forward to the next challenge – and seeing the Red Arrows!

Some may say they are on their way from RAF Scampton to Fairford however, we reckon as they fly over (3:22pm on Friday), they’ll tip a wing towards us at STW Towers. Bravo. Roger that.
and last but not yeast you, our customers, our friends. Thank you.